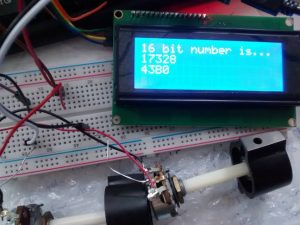 In summary, a keypad would be quicker to use, but this is simple to implement

Not in summary, read on….

Note: scroll down if you want to look at the test code.

Setting a 16bit binary number that needs to be viewed in hexadecimal worked well (third row of display in image right).

Setting a 16bit binary number that needs to be viewed in decimal (second row) did not work so well as the upper byte potentiometer affects all five decimal digits.

It is not completely cumbersome:
1, turn the lower pot right down
2, turn the upper pot to its nearest value just below the desired number
3, finish with the lower pot.
But it is not ideal (displaying the number and 255-plus-the-number would speed step 2). Later: yes it did.

Having three pots, each delivering one-in-a-hundred and handling two decimal digits each, would be far better, and only need small diameter knobs (30mm?) As steps would be ~ 2.5 ° rather than ~ 1 °. But three pots is tending to madness, maybe? (I might still try it….)

Arduino note: After some debugging, I had learned something important about using the I2C LCD library:

Using ‘lcd.print’ left-justifies the displayed numbers, so when over-writing decreasing numbers, a trail of least-significant digits gets left to the right of the displayed number – hence the need to write five blank locations before writing the new numbers in the code below (strictly, it could have been four blanks for the hex number).

A ‘sprintf’ instruction would apparently have the flexibility do away for the need to pre-blank the number’s landing spot. (BTW, sprintf does not work for floating point numbers in Arduino)

The code is listed below
BTW – More for just looking at, as it has got all sorts of hidden odd characters added by WordPress and the ‘wrong’ spaces, so it will not run if you just copy and paste without first cleaning it up. Also, I did edit it a bit without re-testing before I pasted it here. Anyway…

// Engineer in Wonderland May2022
// Testing setting 16bit numbers using twin potentiometers
// on a four line 20digit LCD with an I2C backpack
// One pot sets low byte, the other the high byte
// Displays set value in decimal and in hexadecimal
// LCD I2C code derived from from Arduino_uno_guy example |