It’s pushing close to the one-year anniversary of the day I decided that a 1976 Dodge Charger was going to become my long-term project car, and judging by the relative lack of posts about the car, it’s safe to say that for the most part, the Dodge is holding up to its end of the bargain by being the most reliable Mopar product I’ve owned since the Angry Grandpa Chrysler. That’s a very good thing. It’s also been driven… currently, the replacement odometer is just about to crack 3,000 miles, which puts the car’s overall near 60K on the clock. Nice! The 360 ​​still runs, the transmission still shifts, and the interior is (somehow) still ice white and pretty. But that doesn’t mean everything is happy, or that there isn’t things that need to be addressed. The Charger is old enough to replace any of the women on Sex and The City, and the interior is a lot less leathery.

I refuse to make any other joke with that as a baseline.

Anyways, here’s a catch-up for what has been going on: 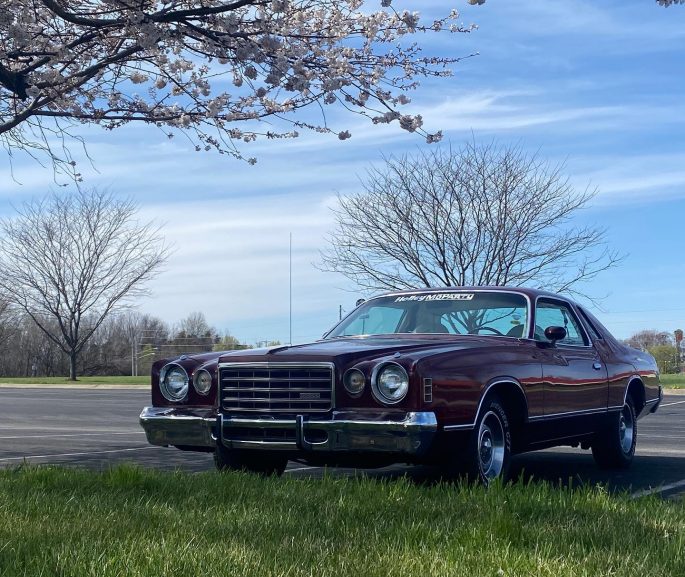 The Charger was roused out of hibernation just as the temperatures started to warm back up into the 50-degree mark and sunny days didn’t mean single-digit temperatures. I felt like this was a perfect time to address an issue that I had been fighting ever since the conversion to an electric fuel pump: the intermittent, unpredictable stalling. To date, I still haven’t driven the car further than two towns away because I don’t want a repeat of the car’s disastrous trip to Ratty Muscle Cars last October (short story: drove to Nashville fine, then stalled out so badly we trailered it back home. ) Unfortunately, some problems sprang up. And one simply sprang: the heater core that I had finished putting back together sometime prior to mid-March is not fixed. It started leaking almost immediately after I hooked the lines back up to it, though it did heat the car properly. For now, I bypassed the core. Frankly, it’s going to be until the fall before I can be bothered to look at that again. And I’d rather go aftermarket at this point, because I don’t think there’s a chance in hell what I have is going to function well. As for the other issues… 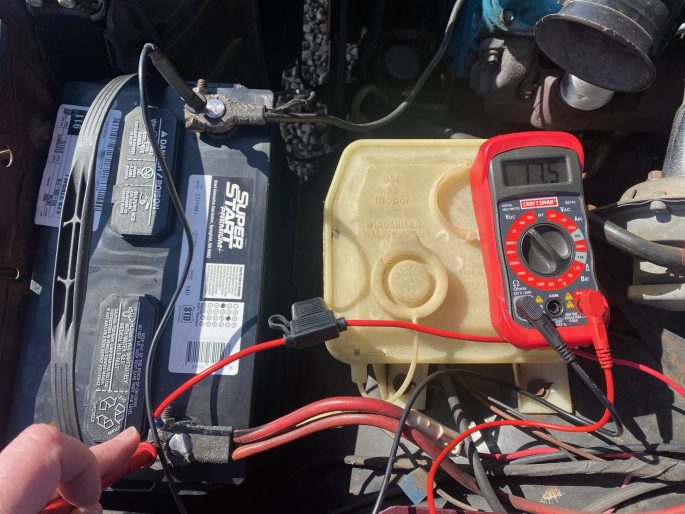 I started with some electrical tracing to try to figure out the stalling issue, since it seemed like an electrical issue more than a fuel issue. You can see the first problem: a serious overcharging issue. The voltage regulator and the alternator had gone the way of the dodo and were replaced, along with the battery. A solid fix, as the following reading was a steady 14.1 at idle. 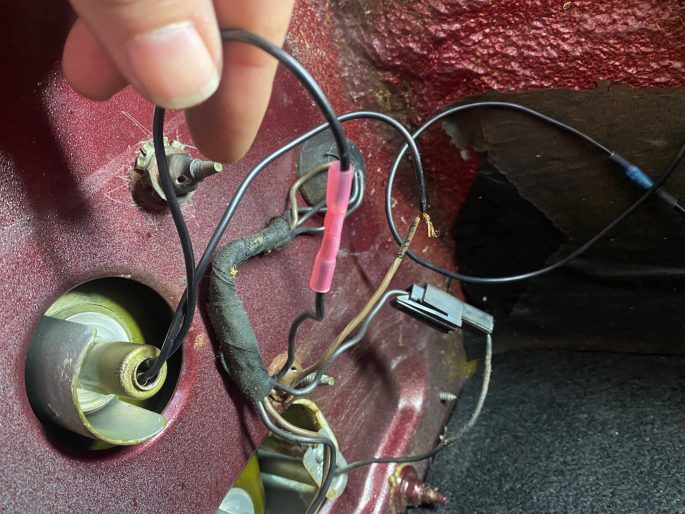 While tracing the fuel pump wiring in the trunk, I happened to notice something I had missed: a botched wiring job on the driver’s side tail light. They were twist-tied and wrapped in electrical tape… you know, “fixed”. Some proper connectors and heat shrink later, and what do you know, both taillights work once more!

Now, this is where I’ll end the electrical chasing, because one glaring fix needs to be made before any more electrical troubleshooting can be made: the ammeter gauge needs to be bypassed. I’ll do a full write-up on that when I start tearing into that project. Until the ammeter is bypassed, any potential electrical issues have the ability to be traced back to the gauge that handles the full power of the electrical system of the vehicle. No wonder Chad is so Mopar-averse. 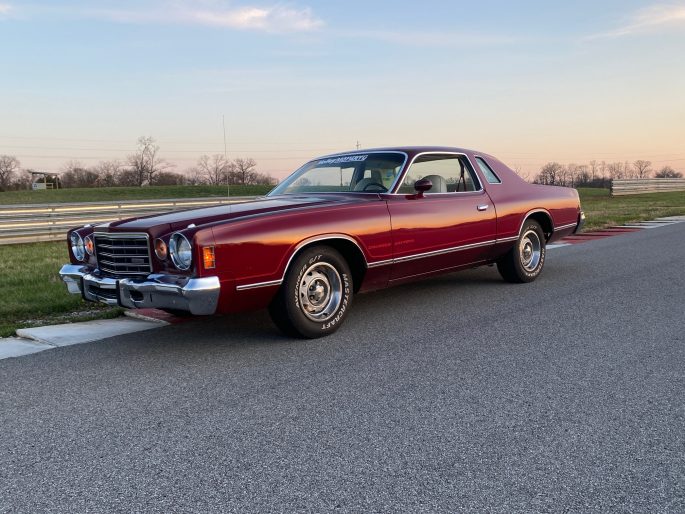 But the car is drivable around town, and has been driven often. But this brings me back to a gripe I’ve had ever since I laid eyes on the car: the rolling stock. Do not get me wrong… I like the Rallye wheels and acorn caps. I do. I just think that 15 × 6 on a 225-series tire leaves this car looking dainty. It’s like seeing a 300 pound ballerina dancing to Swan Lake. It ain’t right. I priced a set of Rallye wheels in larger sizes. My bank account threatened me with a divorce. So… 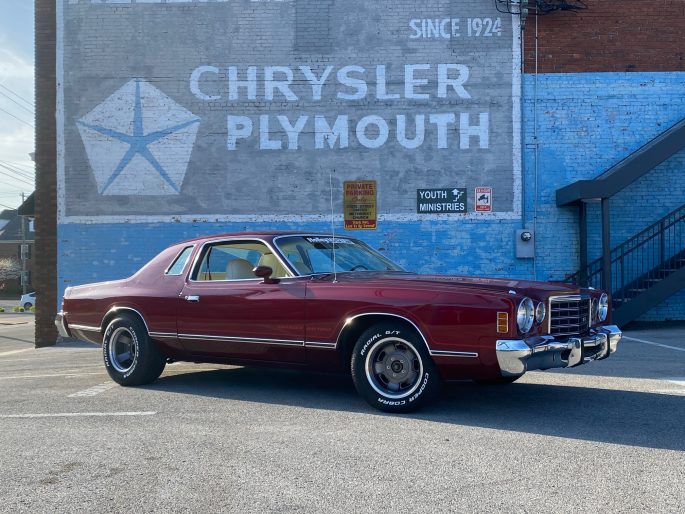 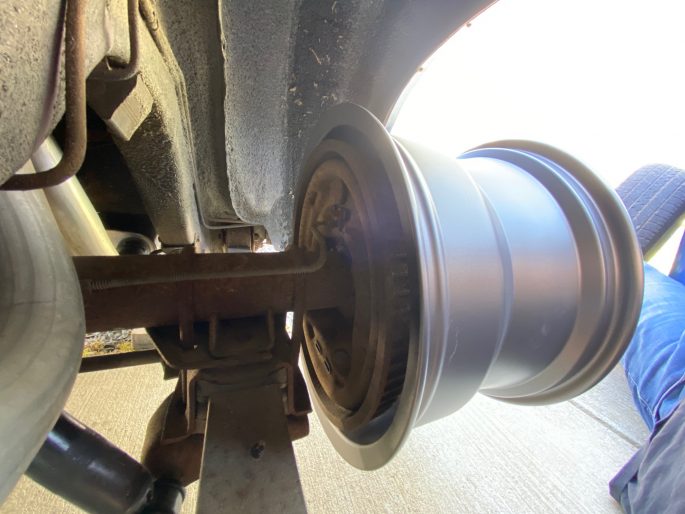 It’s amazing what a set of wheels will do to a car. The Charger made the leap from “nice survivor” to that late 1970s Day Two look that, frankly, has stopped people in their tracks. While doing a photo shoot for Holley, one kid rolled up in a New Edge Mustang beater. He stopped dead in the middle of two lanes of a one-way thoroughfare, stared at the car for a minute, then yelled out, “Man, I like that bitch! I like it a LOT! ” before dumping his clutch and striping the roadway. That kind of reaction is absolutely priceless. 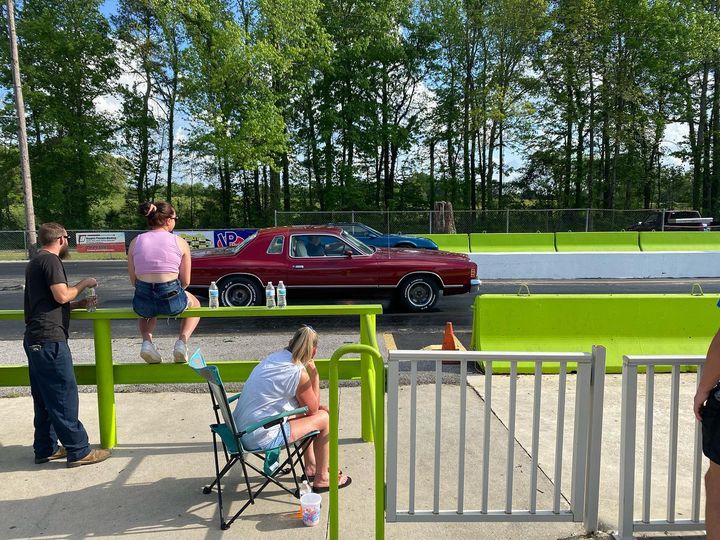 The Charger’s most recent adventure took it down to Jake’s Dragstrip. Austin Griggs, the dude behind Ratty Muscle Cars, had extended an invite to me to bring the car down to be part of a scene for a movie that was being shot there. Unfortunately, you won’t see the car on the silver screen, because I wasn’t going to stick around long enough for the film crew to get their shit together. We had towed the car down on a trailer (there’s that trust thing again…) and we would be facing a four-hour trip back to Bowling Green. I did, however, get to run the car down the eight-mile, so effectively I have a baseline for the car. Any idea on how fast it is? Any guesses? 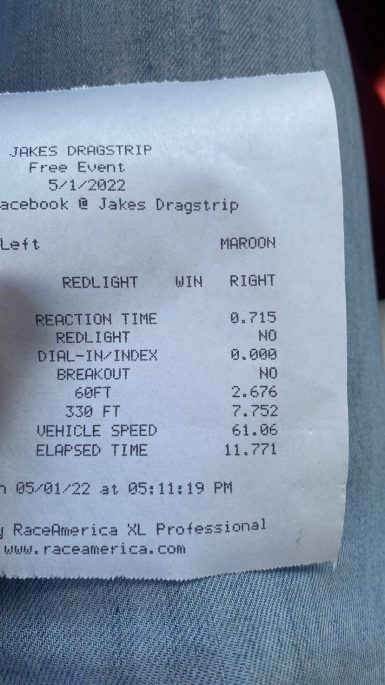 That’s depression right there. Look, I had no delusions about this car being fast. It’s a smogger 360 that’s backed up to a 2.41 rear axle. But that’s… that’s sorry. The daily-driver Chevy Volt could bury this thing in the quarter. I watched an equally-stock mid-1980s Camaro hand me my ass on a silver platter with garnish on the side just to rub it in. This will not stand. Bet on it. 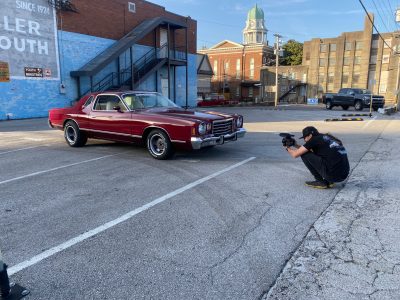 Special thanks to Hunter Madison for making the Charger look killer in photos. You can follow Hunter’s work on Instagram, @ wulf.creative.