Ed. note: This is your language warning. I’m going to have fun with this series.

Click here if you missed the first chapter in this series!

We had the Plymouth dragged to my house. We had folded what was left of the stock exhaust into oragami, pissed off my neighborhood with the sound of a dragging pipe, trenched part of my front yard, but the 1976 Fury Sport was on the work pad in my front yard, with a completely clean engine bay and an electrical system that had not gone up in smoke yet. So far, for a car that cost about as much as the carburetor that was put onto the Rough Start Fox’s 302, that’s a win. Notice that something is missing? That’s right, the 318 and 904 automatic did not make the initial trip. They were still sitting on the floor of the garage we’d bought the car from, which meant that I had to borrow my wife’s truck and on my lunch break, go get the engine and everything else that was left to pick up. I’m sure nobody blinked twice at seeing an engine and transmission strapped-down in the bed of a truck the rest of the day. 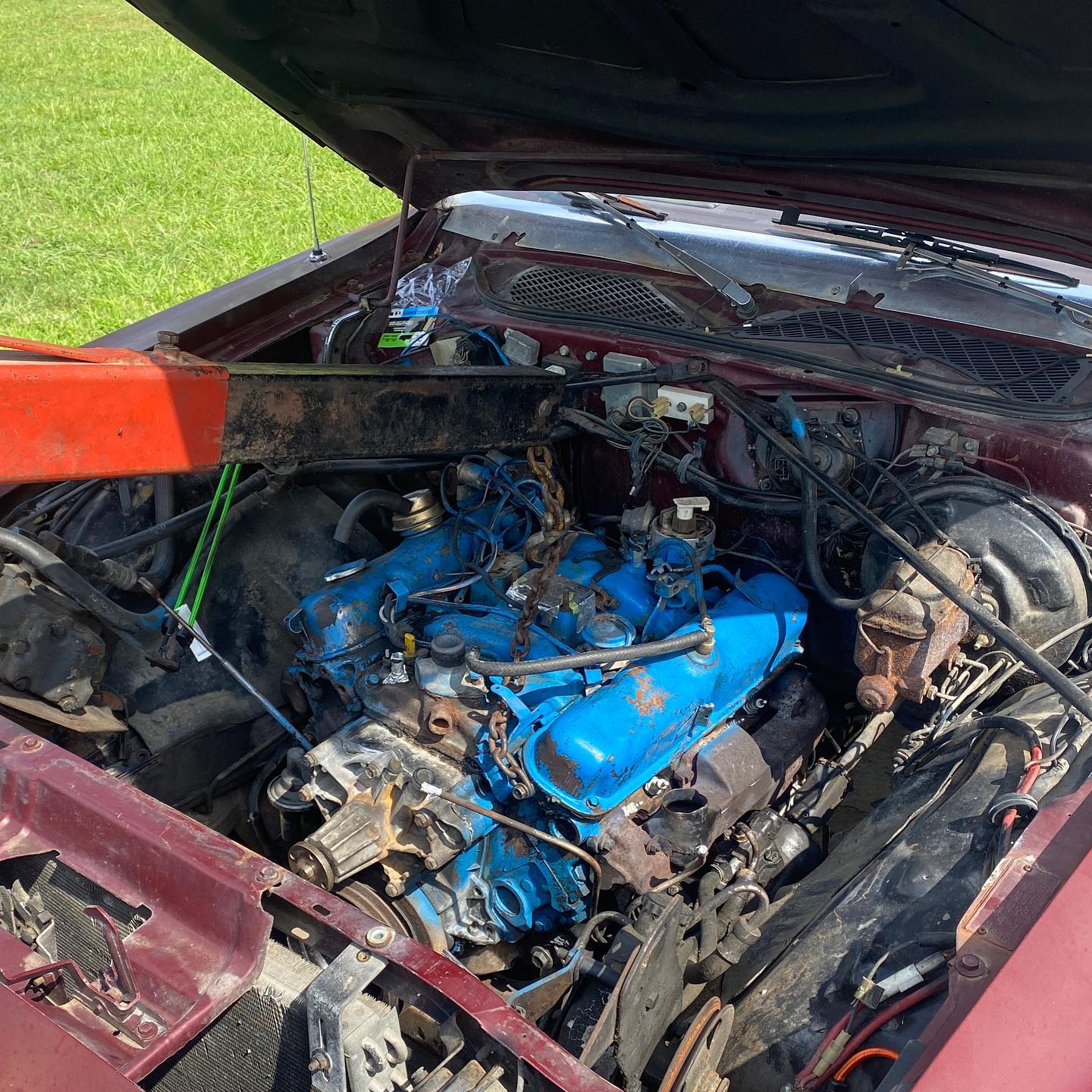 That weekend, priority # 1 was to jam 150 horsepower’s worth of Malaise-era muscle back under the hood of the Fury from whence it came. Actually plonking the engine back underhood would not be a big deal. It came out of the car… stood for reason it would go right back in with no fight, right? It did, but there were a bunch of ancillary issues that would need to be addressed before this thing was going to run under it’s own power. Questions needed to be answered… starting with, “Where the hell is everything else?” We suspected that everything removed from the car was shoved into the trunk… BUT, because my luck had to step into the way, the trunk key was missing. My neighbors got the treat of watching me use a four-foot-long drill bit to bust through the trunk lock cylinder. But it worked, and once I vacuumed up the metal shavings and installed a new, keyed cylinder, we got to work assessing what we had to work with. 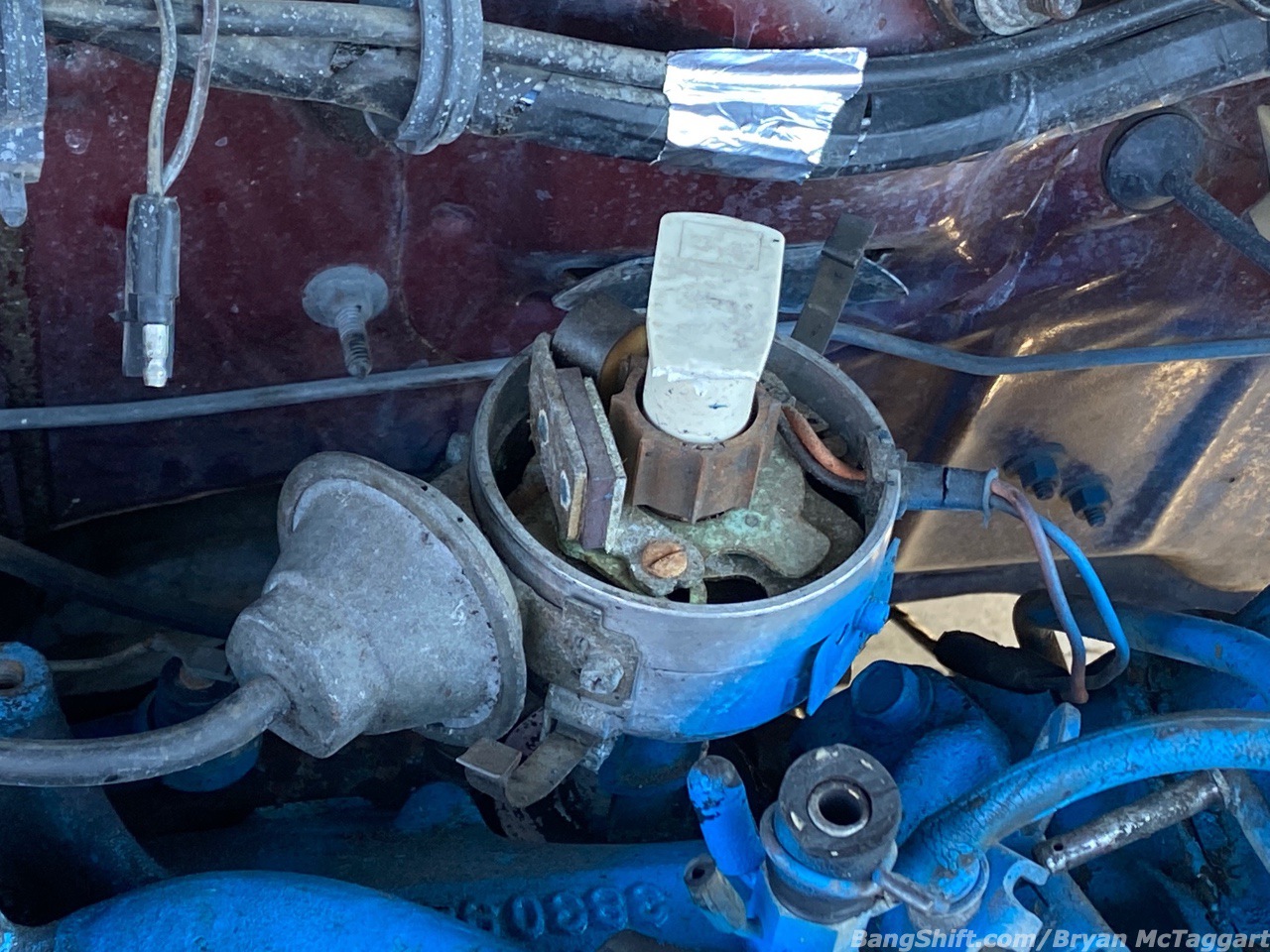 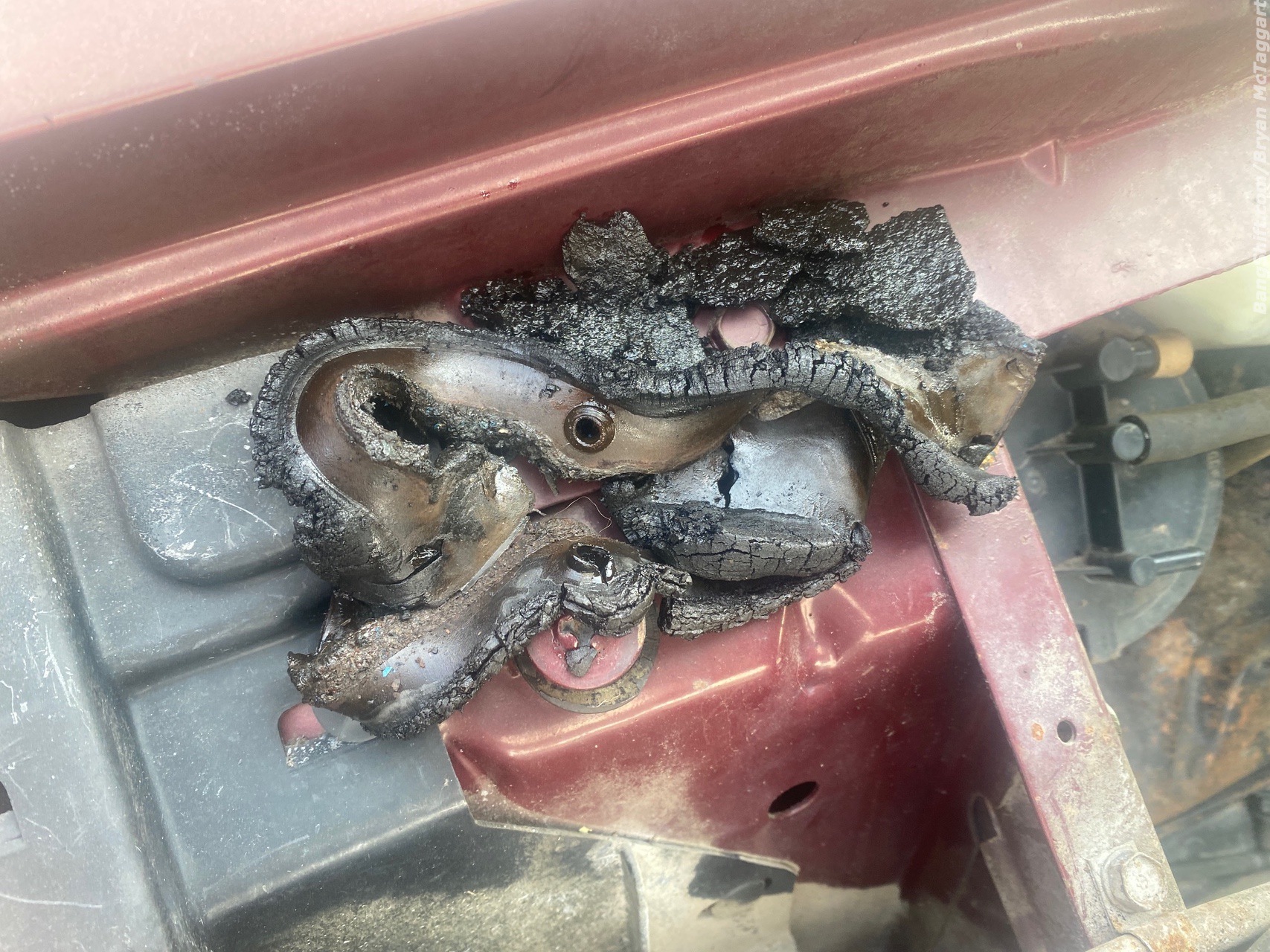 The radiator, which had been left in the trunk, was crumbling like a piece of bread left out in the sun for days. The radiator cooling lines had been cut about a foot back from the radiator with what I suspect was either bolt cutters or large pruning shears. There were no “down pipes” to go with the stock exhaust… those were simply gone, they weren’t with the car at all… so we’d either have to get headers or custom-make down pipes to go to an exhaust, which had to be replaced because… well, because I had to hacksaw the old system off of the rear axle. We weren’t sure if we had everything for the kickdown, the water pump was seized, the distributor’s top end had been crushed, and a freeze plug was completely missing. On the positive side of things, the crank rotated with no issue, so add spark and fuel and this puppy should run. It’s the beauty of the 318… stock they don’t make power and aren’t that impressive, but a 318 will run at the last inch of it’s life better than most engines run on their best day. It’d live. 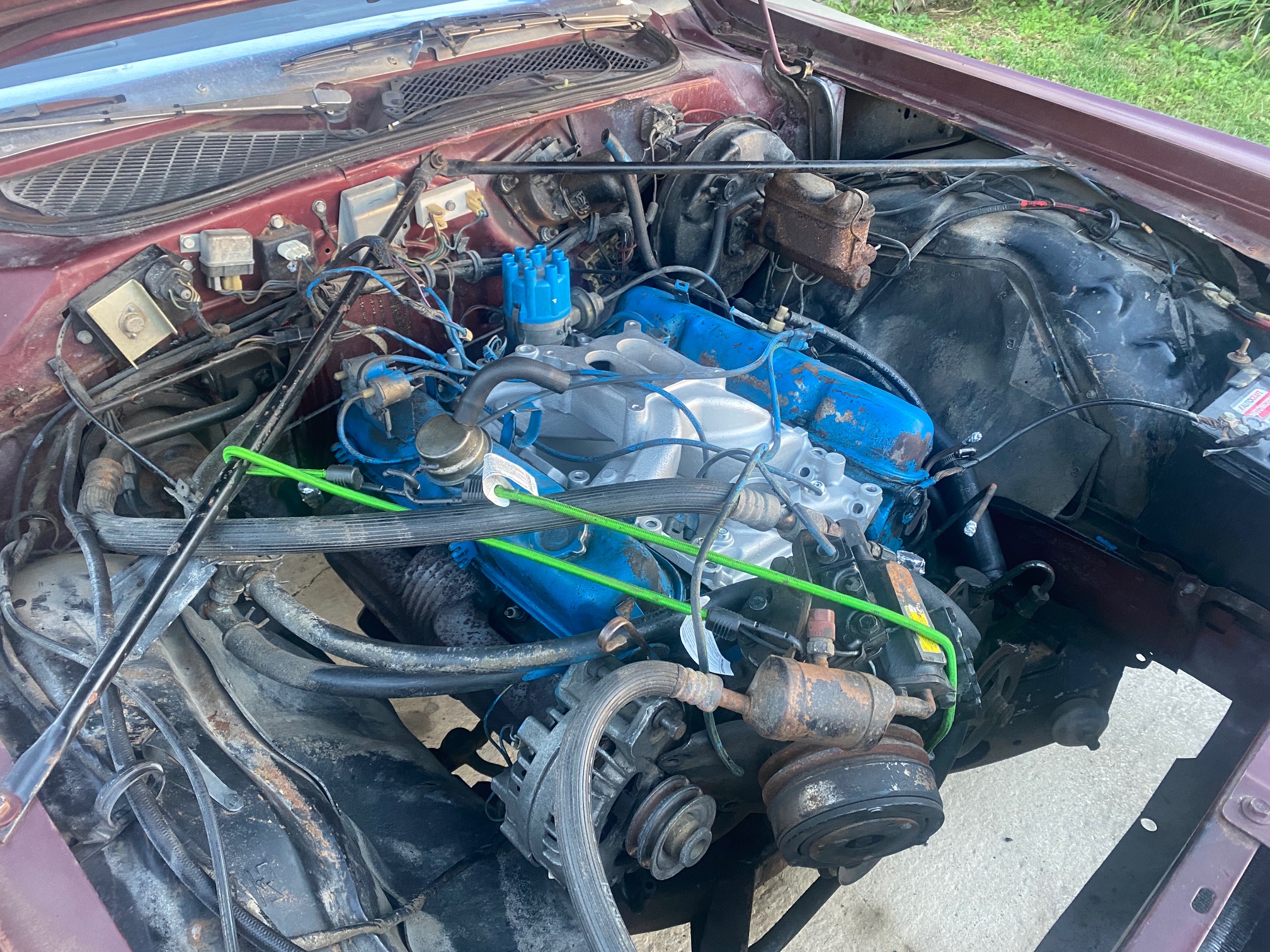 And that’s where our first mistake happened. Once the engine was in, other things stood in the way. I got busy working on the Charger’s HVAC system and Chris got busy acquiring parts to make this thing actually do something besides keep the concrete pad dry when it rained. We figured that we had time to get things together well before our goal of the first King of the Heap race in January 2022. We had things we wanted to get done while the weather was still good, because we both knew that we didn’t want to work on this big, ungainly bitch in the cold. We would do bits here and there, but it ultimately took bucking down on a couple of weekends to get things right. Chris took what was left of the transmission cooler lines to get cleaned up and flared so that we could run a bit of ATF-safe hose from the ends to the brand-new radiator he had bought. I replaced the water pump, flushed out the block a bit and put in a new freeze plug. Chris scored a new kickdown assembly and a four-barrel intake to replace the 2-bbl factory unit, which saved us a ton of time (and the weight of a small child off the nose). A little bit here, a small bit there, and we got to the point where we had fuel in the bowls of the carburetor and we were ready to see what would happen:

Happily, nothing caught fire, exploded, or dumped seven gallons of oil onto my property, and none of the neighbors complained about yet another fully unmuffled car running on my property. We had hope. We needed to finish out a fuel system, get the timing sorted, get a set of tires that weren’t a second away from exploding onto the car, and verify that we had a functioning transmission. What we did learn was that the shifter linkage has so much slop in it we almost always need to have the shifter in Neutral in order to get past the neutral safety switch because Park is almost unreachable. 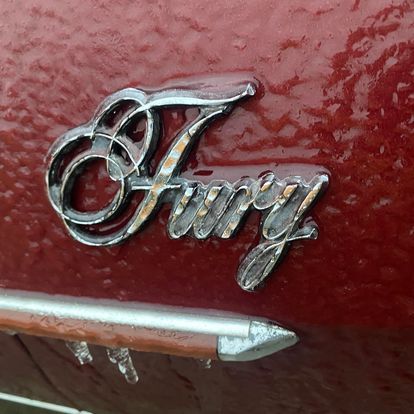 Sadly, this is where the project went off the rails. The first start happened in early December, and while the Plymouth ran, moving wasn’t an option, we hadn’t touched the suspension, hadn’t driven the car to see what could potentially be broken in the system, and had done zero tuning whatsoever. We had the components for an exhaust on-hand, but the exhaust manifolds were the hang-up… do we pull them and pray every bolt comes out to swap for headers, or do we wind up with a drill, the tap set out and tons of anger over a car that is just barely above “worthless”? So… we procrastinated. There, I said it. We had lost the initiative, we lost the will, and within days of the first start, the weather sealed the deal as Kentucky proceeded to endure what happens when Mother Nature uses a magic 8-ball for meteorological conditions. We had the tornadoes, then we had full-blast winter conditions, then mud, then the Holidays… you get the idea.

We weren’t going to make King of the Heap’s first event. I wasn’t sure we would make the second event, either. But there was no way this car wasn’t going to live… especially after Chris started to fall in love with it. This is the second time that we’ve drug home a sub- $ 1,000 car and he’s gone head-over-heels for it, the first being the Dirty Cougar project. This Fury shall live. Next update, you’ll see it drive.